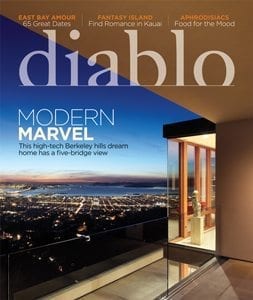 The Appleby Hard Surface Division is known for working on fine homes throughout the Bay Area.  Recently, a spectacular home in the Berkeley Hills was featured in Diablo Magazine’s February edition.

Appleby cleaned, honed and sealed the limestone for this architectural masterwork last year, unaware that it would gain the notoriety of front-page attention.

The home, owned by Lalit and Papli Kapoor, is an 8,000 square-foot expanse with views of five bridges across the bay, along with Mt. Tamalpais and the Silicon Valley.  The limestone was freshly installed when we saw the house, workmen still scurrying around to finish installation of flat-screens and exterior details.

Often times, after installation, there is grit, dirt and grout haze on the stone, and that’s what happened at the Kapoor’s house.  We first cleaned it and then Lalit selected the correct sheen he wanted on the floor.  If the stone is too shiny, especially with all the windows in this home allowing a 230-degree view, the reflection can be migraine-inducing.  The Kapoors wisely chose an 800 grit high-hone, which provides them a nice satin sheen without any over-bearing reflectivity.  No one wants to be forced to wear sunglasses inside their house, especially when they’ve built such a showpiece.